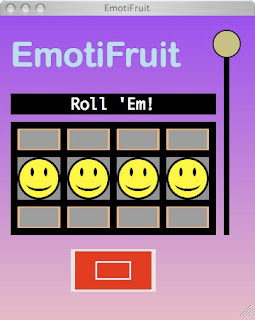 EmotiFruit is a kind of simple algorithmic music generator, with an interface inspired by that of a fruit machine. The user "pulls" the "arm" and the four faces scramble, eventually settling on new expressions. The user can then "nudge" the faces up to 4 times. When the arrangement of faces has been settled, pressing the "transport" button will play the new composition, based on the arrangement of emoticons.

The possible expressions are representations of the following states: happy, laugh, wink, kiss, frown, cry, evil, angry, rasp, wow and hmmm. For each state, there is a sequence of notes, a synthesis patch and an effects patch. The expression in the first slot determines the note sequence that will be played, the second decides the sound that will be used, which always has a modulating element. The third face selects the modulating sequence of notes, and finally the fourth emoticon decides the effect that the sound will be played through. 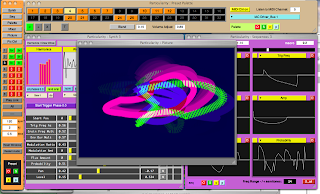 Particularity is an open source program for generating sounds and visuals. I am honoured that it has been awarded joint first place in the LoMus 2010 competition.

This program is for Mac OS X 10.4 and above, and has been tested on 10.4.11 and briefly 10.5. It is based on SuperCollider using its standalone capacity. This is the initial release and further refinements should be expected.

Particularity, along with a documentation PDF and the source code can be downloaded here.

Any queries regarding this program should be addressed to:
872204 [at] chrisjeffs [dot] com

Please do not address queries about Particularity to any other address, or use this address for other purposes! Unfortunately in-depth correspondence may not be possible for the next few weeks, however any bug reports or suggestions will be received with interest and gratitude.
Posted by cylob at 4:38 AM 8 comments:

Hi and welcome to my website devoted to my music creation software. I've been creating programs with SuperCollider since 1998, but this is the first time I have made any sort of public release of my work. This move has been prompted by my involvement in the LoMus award, as detailed in the next post.
Posted by cylob at 4:33 AM No comments:

It is possible to donate towards my equipment costs here.